We can’t get no sleep

Well then, the Vandal VST & AudioUnit Plugin is out since almost a month. We’re again (or still?) busy here, refining the current state and including new stuff. We are doomed to 😉

Here’s a quick view on what can be expected next:

Nothing spectacular on the UI, but the small LED saying ‘yes, there’s MIDI coming in‘ shall also serve as an indicator that we take MIDI seriously. We got to finalize certain parts of the architecture somehow, but such things are naturally not that visual.

Another thing we included was having the virtual microphones selectable on & off (now, is THAT rocket science or what???).

And we also added ‘delay’ knobs to the ‘tweak’ view of the cabinet simulation. These let you shift each mic in time to up to 25ms and offers for a vast palette of new sound textures. That can range from slight phasing artifacts to a complete twist of the cab sound. And you can easily create convincing stereo effects this way (engineers call this the ‘Haas effect’). The old ‘mic phase +/-‘ switches were replaced by simple push buttons to flip either phase, as we needed to save space. What was of minor importance before (the phase), can now have a dramatic impact in conjunction with the added delays.

While this blog will be kept updated with any non-marketing stuff, such as ongoing development details, vandalamps.com will probably your first point of interest concerning product orders, demo downloads, updates, additional presets and such.

We also have a bunch of audio & video files ready for you to listen to and watch. Within the next weeks/months, we’ll set up more content, providing more presets, additional videos etc.

We’d like to encourage everybody to get in contact with us, especially if you’re using the Vandal plugin and made cool presets or audio/video demos that we could post. If we can find you & Vandal on myspace or youtube, let us know as well. We want vandalamps to be as alive and vital as the plugin itself.
See ya! 🙂

Okay, it’s been a while since we left any info here. We’re almost through with development (still some last-minute tasks left). So here’s just some quick frequently-asked-over-and-over-again info:

The official release date will also be the start of www.vandalamps.com. Gonna be cool as well 🙂

We’re currently about to finalize the code for the upcoming VST version of the Vandal plugin and managed to include a couple of new stuff. Here’s a pic of what recently was added to our effect pedal collection: 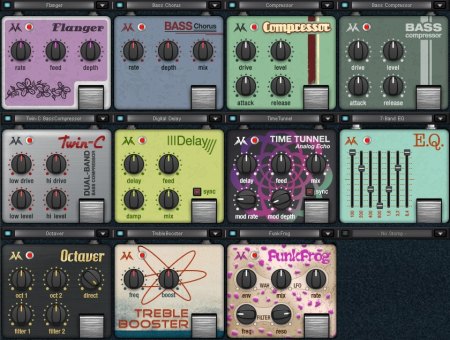 These stomps are as thoroughly modelled and programmed as every other part in the plugin, so not just a bunch of cheap off-the-shelf algorithms. Each of them is capable of recreating the naturalness and unique sound texture associated with stomp box fx as usual.

Preparing the coming VST version of Vandal here currently (and perhaps Mac AU if we got resources), we’d like to gather more feedback and information from potential users on what they expect from a good amp-simulation product.

These links take you to the survey (choose your language):

Don’t hesitate. Even if luck isn’t on your side, there’s at least the chance to apply for beta testing through the survey, so that we perhaps get back to you sooner than you think 🙂

The VANDAL Guitar & Bass Software is currently bundled exclusively with Magix Samplitude 11 Pro & Sequoia 11, which were released in Germany a couple of days ago. International versions of these products will appear in late summer / early autumn (TBA).

A seperate/standalone product release is being evaluated at the moment. At this time, we can’t precisely say when or whether it’s VST, AU, or both, a boxed product or download-only. But we’ll let you know ASAP. As this blog is development-only, decisions are up to teams other than ours.

In the meantime, we continue developing the software further. We’ve recently refined the amp & cabinet parts, tweaked the stomps and fx, and we’ve also concentrated on gathering presets and templates (the latter serving as a starting point for new amp & cab endeavours on the users’ side).

Here’s how VANDAL sounds in its current state (courtesy of Dimi Nalbantov):

Small snippets of audio fed through various parts of the plugin: Some of the stomps: Some rack-unit FX (behind the CabSim): 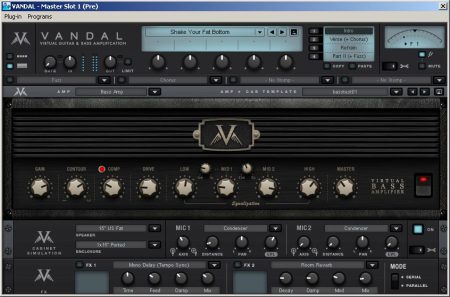 So, we’ve changed the preamp a bit: Now, the signal first enters the first gain stage, then can be shaped via the ‘contour’ knob (kind of loudness / lower mid dip; an interactive / passive filter network), then gets some compression.
The compressor is a FET-based feed-back model, similar to some stomp designs or vintage studio rack gear. It’s ultra-transparent and musical; you can kick it hard and it still doesn’t do strange things.

The EQ section is a split design: a passive low/high baxandall network followed by an active 2-band mid control. All filter slopes are 6dB/oct, which in our opinion is the best compromise between being versatile and retaining the character of your bass guitar.

Here are some audio clips:

basstest_vandal (the amp setting from the picture above)

basstest_vandal_chorus (VANDAL’s stomp guitar chorus in front of the amp)

Here’s a clip by Dimi, certainly in a more sensible context: 😉

This morning was the birth of Vandal’s 2nd amplifier. The bass amp is currently being added to the plugin’s main architecture. This is how it will look like: 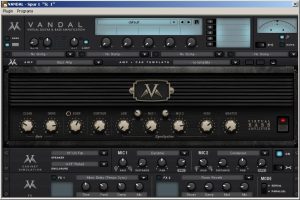 Although it already pops up on the screen (upon choosing it from the ‘amps’ list), there’s currently not much coming out of it. It’s work in progress. Soldering lots of wires here… 😀

The architecture we’ve set up the last couple of weeks allows for ‘amplifier mainframes’, which means a generalized architecture of amps that have to be specified in detail. That was quite a bunch of code lines, lots of coffee and headaches… but now we’re prepared for a new beast 🙂

The bass amp is designed to serve a broad range of players and music styles. It’s an all-tube design, btw., housing a highly-interactive passive filter circuitry. The amount of knobs might appear limited at first sight, but we’re certain this baby becomes at least as versatile as the guitar amp. 😉

We’ll see within the next couple of days. Stay tuned.

It’s all about the crunch tone

Since a few days, we’ve been tweaking Vandal’s guitar amp tube stages for the ability to deal much better with slight overdrive. That’s a tough one, but I think we’re close to getting that nailed. We’re aware of the fact that delicate, responsive crunch is what divides a good amp from a bad one.

Here’s the current status, a video by Dimi Nalbantov:

What we did is basically fine-tuning the biasing of all affected preamp tubes (2 in ‘classic’ mode, 3 in ‘british hybrid’, 4 in ‘modern high gain’) as well as changing the tube character in particular.
We now have different models of tubes stuffed into the virtual circuits. In some stages we got more or less 12au7 behaviour and 12ax7 tubes when more gain is needed. Apart from ‘mu’ (amplification factor) and characteristics, each tube got implanted its own tonal response. We now got even more degrees of freedom than before, yabbadabbadoo…

It should be audible that we progressed somehow. The whole amp is now more responsive to volume change on the input and reacts a lot nicer on slight overdrive settings. It ‘breathes’ more, hopefully.

We still got stuff to do soundwise… so check back often 🙂

Our tester Dimi has published a few videos where he’s getting serious with our software. Have a look:

END_OF_DOCUMENT_TOKEN_TO_BE_REPLACED

Vandal Amps
Create a free website or blog at WordPress.com.